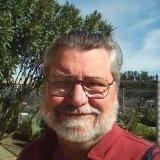 Relationship between Jog Settings vs. X and Y Scale